Susan Stewart: "Poetry has no material value: its value lies in what we make of it."

An interview with Susan Stewart: "Poetry is in and for itself, just as persons are in and for themselves. No one has to read or write it.”

Ahmet Güntan: I have been following your poetry since 1983 and I have found the answers to emerging questions en route in many interviews and in your book Poetry and the Fate of the Senses. So in this interview I will only ask the questions that will help me to introduce you to Turkish readers.

I always imagine your narrator as an adolescent girl, more like a philosophical Jasminefrom Carson McCullers in The Member of the Wedding, standing just before the threshold of the world of grown-ups. It is a world of exactitude, a world that is ruled by certainty and you feel the urge to do something wild and sudden against it that has never been done before and promise yourself to always try to be the first person to see things for the first time with all her innocence and intelligence—  it seems as if you have entered the realm of poetry to disentangle. You start your poem the “Pine” with disentangling each letter in the word PINE— “a plosive, a long cry, a quiet stop, a silent letter”. Do you remember your first acquaintance with the idea of poetry? How did you feel?

Susan Stewart: Your intuition that I am on a threshold, trying to disentangle what I perceive, is quite moving to me, for that is in fact a good description of the perspective I’ve always felt when I am writing a poem. Composing a poem helps me grasp or come closer to things I don’t understand. I always know something more when I have finished a work–and that knowledge seems to come from the writing itself.  I rarely, perhaps never, write to express feelings and insights I already have; I’m drawn to a horizon I can’t quite see. I wrote poems from early childhood– as early as I was able to write in sentences. And I felt them with my whole body. I used to tap my fingers or feet or sometimes hum along when I would read my poems out loud. It was only later that I learned there were actual patterns and terms to describe the measures of poetry. Yet it is still the felt poem that matters.

Ahmet Güntan: You are a scholar. You have written books on form, culture, aesthetics, representation, and poetry: Crimes of Writing (1991), On Longing (1993), Poetry and the Fate of the Senses (2002), The Open Studio (2005), The Poet’s Freedom: A Notebook on Making (2011), and recently The Ruins Lesson: Meaning and Material in Western Culture (2020). One may easily call your poetry “lyrical” but the  investigative and contemplative attitude, I think, puts it rather in the category of “antilyrical” in Nezval’s sense of the word— a logical struggle throughout the poems. In “The Owl” it is the peripheral vision. In the “Scarecrow” it is how objects exist when we are not there. In “Field in Spring” you hold a mirror, horizontal, to the rain and see “the blurred repetition of ruled lines” which I think is very ingenious. Is this attitude nourished by your being a scholar? How do you protect the poet from the intellectual attacks of the scholar? Did you come up with some mental exercises for this?

Susan Stewart: I don’t have to protect my poetry from my writing as a scholar. My poetry is always ahead of my scholarship and ever-present.  But I feel compelled to learn about the thoughts and lives of others, both living and dead.  I often need to escape my own time and space. The histories of literature and philosophy have been a great resource and consolation to me whether I’m working in prose or poetry.  And I am not so interested in myself that I could be happy working on my own poems alone. Poetry is solitary work and a solitary responsibility. Only I can write my poems. But when I work as a scholar I am part of a long tradition and an enormous community. I can do my best, knowing that others will transform, and possibly correct, my perspective.

Ahmet Güntan: You say that your third book “The Forest was made by drafting the poems, then throwing them out and rewriting them from memory, supplemented with commentaries.” As Pound puts it “Technique is the test of sincerity. If a thing isn't worth getting the technique to say, it is of inferior value.” How do you define “experiment” in poetry?

Susan Stewart: Poetry is an act of communication between human beings and I don’t believe in experimenting on others. But I do believe in finding the right method and form for the concerns of the poem even if I have to invent them. With The Forest I felt I was sleepwalking as a poet and I needed to wake up, to find another way to get to the truth of those poems. They are concerned with the generation before mine, a generation I inherited only through stories, gestures, and slips of the tongue–an inheritance analogous to the process of birth itself, which we each experience, but don’t remember, and so know through others’ testimonies. 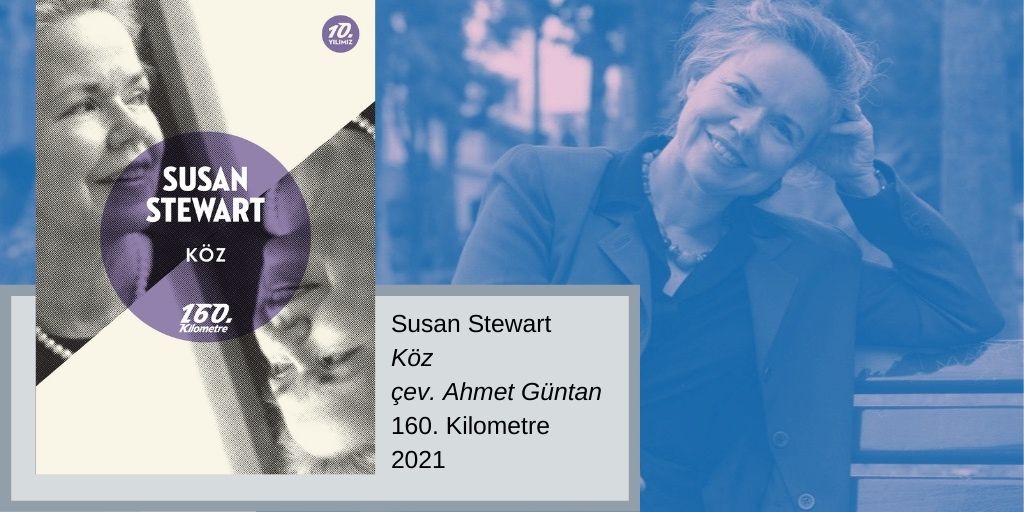 Ahmet Güntan: When I told you how small the number of the poetry readers in Turkey was, you gave me an answer which I always remember: “Do you know the Hebrew mystical tradition of the tzadikim nistarim, the 36 righteous people in each generation who save and maintain the world? Maybe we poets need just 36 careful readers and poetry will survive.” Is our existence evolved to be a sect now? Can we free ourselves from that destiny? Do you think “poetry is dead”? How do you see the future of poetry?

Susan Stewart: The tzadikim nistarim, so far as I understand it, is not a sect. The 36 don’t know their compatriots, but they know they exist and are strengthened by that certainty. That is what I saw as the analogue. Styles of poetry come and go; celebrity culture ignores, or elevates and then destroys, individual poets; a distracted and bored public views seriousness as a presumption. But if we’re called to write and read poems, none of that matters. What would it mean to “succeed” as a poet? How could we know we had reached a “goal”? The fate of our poems is in the hands of the past and future as much as the present. To have our poems in libraries is itself a kind of immortality; the only better outcome would be a stranger knowing our poems “by heart.”

Susan Stewart: In the first weeks of January 2020 I had letters from several friends in China who were witnessing the pandemic first-hand. I lacked the imagination to see that their suffering would ricochet within just a few months across the world. And they would soon be writing concerned letters back to me. Our political situation made this country, and by proxy all it reached, vulnerable to the worst consequences of the virus. Early on, I re-read Defoe’s Journal of the Plague Year and so much of the psychological reaction to plague was unchanged. I was struck, however, by how much more responsible and reasoned were the efforts of the 17th century state officials.  Greed, present-centeredness, and lack of imagination are endemic to our economic system and now we have an even more brutal concentration of wealth and a concomitant explosion of poverty. Every day it is becoming clearer that many of those in power were and are perfectly willing to let others die so long as they themselves are undisturbed and protected. The willingness to let others go without decent food, shelter, and education, to suffer injuries in the workplace, and to be paid sub-standard wages has long continued, but now we see that there is no bottom to this indifference. In the past few weeks the new government has begun to make some positive changes, but its power is fragile and often stymied.

Ahmet Güntan: Thank you Susan. Before we finish would you say something about your thoughts that poetry should be read slowly. Because like in any other country we here are trapped also by social media.

Susan Stewart: Regarding social media, and technology in general, we are only trapped by what we accept. We may need to use a computer to get a vaccine appointment or send a check or listen to the song of a forever-distant bird. But we don’t have to give pictures of our loved ones to strangers. Or even take such pictures when we have a chance to talk in person: that is, quietly, at length, not knowing where our conversation will go. Poetry belongs to a world of care and heightened attention. A world where we mean what we say but say more than we mean. It can’t be rushed; we can’t skip a step or sum it up. It is in and for itself, just as persons are in and for themselves. No one has to read or write it. It has no material value: its value lies in what we make of it. This all seems of vital importance to me.